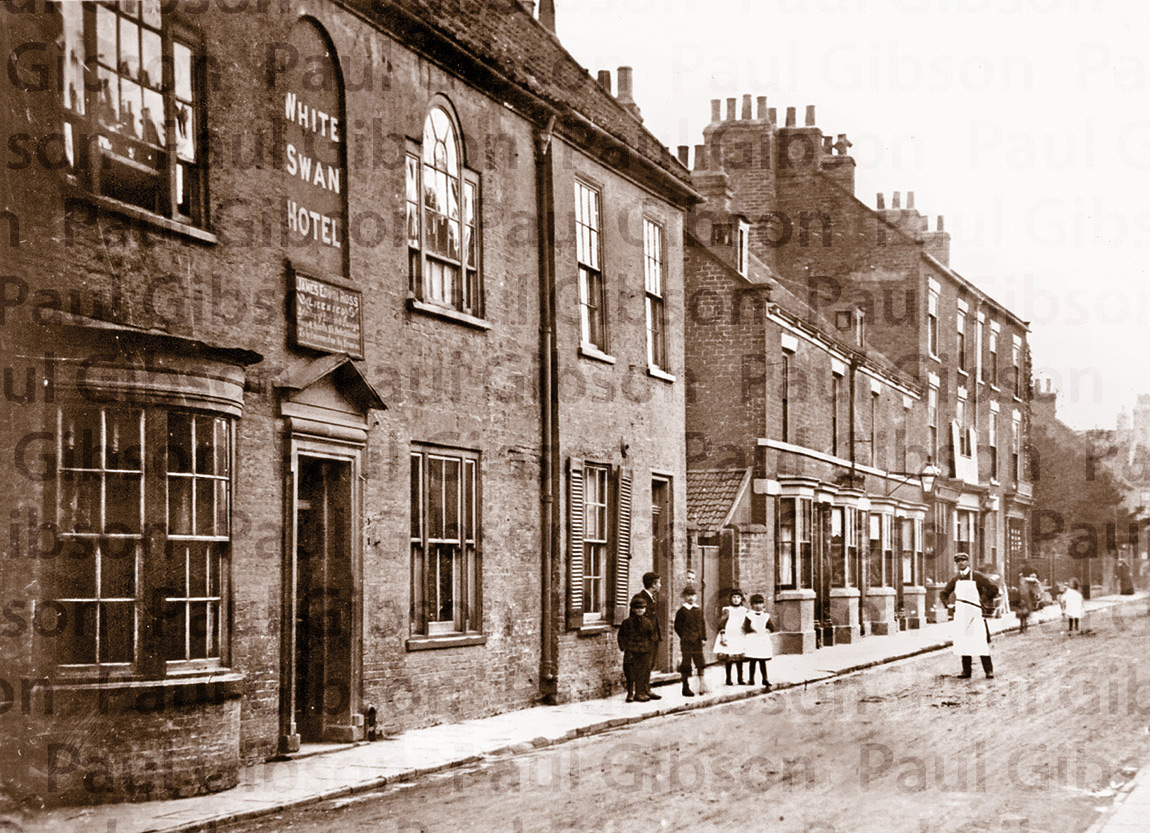 A view looking along the Fleetgate elevation of the original inn, from c.1905. Note the Georgian bay-window.

Amongst the several 17th century trade tokens that exist for Barton are two that relate to the White Swan. The first dates from the 1660s, and is a copper half-penny that bears the legend ‘GEORGE KIDSON AT THE’ with the image of a Swan in the centre of the coin (shown below); on the reverse it states ‘his halfpenny’. The other is a farthing with the legend ‘G. K. AT THE SWAN’. The coins clearly indicate the existence of the Swan at this period.

Although the present building at first glance suggests otherwise, the White Swan’s main frontage originally faced Fleetgate, not Butts Road. Its main Fleetgate two-storey elevation has a steeply hipped pan-tile roof, suggesting a date of the late 17th century, possibly with a much older core. This would seem to concur with the evidence of the tokens and a later news report (see below). It also has a dentillated brick eaves course, very common in Barton during that period. 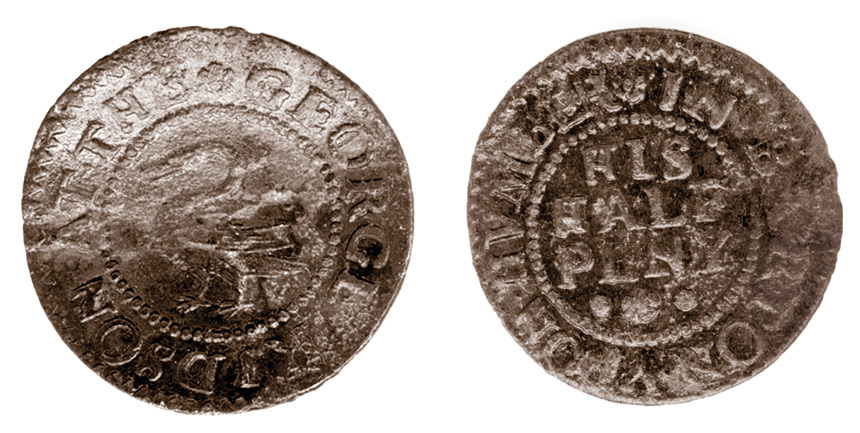 The front and reverse sides of a 1660s coin from the Swan. 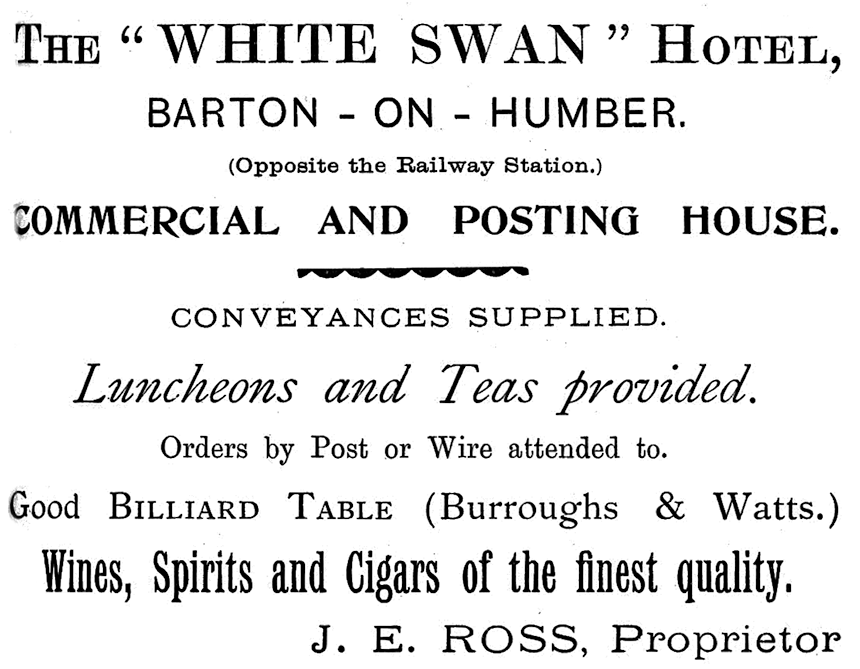 The White Swan c.1900, with a cyclist club meeting.

An advertisement in the Stamford Mercury 15 March 1733 hinted at its great age when it noted:

‘The ancient and well-accustom’d Swan Inn at Barton upon Humber in Lincolnshire, is now in the Tenure or Occupation of William Hudson, where there is very good Entertainment for Man and Horse, with a very good Coach House; and also thirty single Standings for Horses in the Stables.

N.B. The same Inn is near Barton Ferry, and care will be taken that all Persons which stay at the same Inn shall have the Tide, the Ferrymen call every Tide’. (sic)

The sequence of building appears to have started with a traditional alehouse (the remaining Fleetgate two-storey block), probably as a house later converted to an inn. This in turn was re-fronted during the Georgian period and photographs from the early 1900s (see below) show a fine Georgian pedimented door-case and a Georgian bow-window on the ground floor, all now sadly removed. Some surviving clues do remain, e.g. the Italianate windows on the first floor in Fleetgate. This building was probably supplemented with the addition of the larger, three-storey building facing Butts Road, following the growth of Barton and the success of the inn. This later addition appears to be of the late 18th century.

A licensing record reported in the Hull Packet in 1864 noted the transfer of the licence of the Swan ‘from Messrs James Hart & Co to Miss M Astrop wine & spirit merchant who is the owner’. A 1926 photograph made for the Hull Brewery Co Ltd shows the single storey building to the east of the Butts Road frontage had a faded ‘Britannia Brewery’ sign on the wall; the Brittania Brewery, owned by Sutton, Bean & Co Ltd, was formed c.1860 and was based in Brigg – they held the Swan from c.1900. The Hull Brewery Co Ltd purchased the Britannia Brewery in 1925 and part of the package was their 17 pubs in this area, which included the Swan. The photograph was probably made to show the building prior to the alterations made by the company in 1926. The Hull Brewery maintained the Swan with a full alehouse licence according to the registers in 1932.

During its heyday in the late Victorian period The Swan was advertised as a ‘posting and commercial house providing first class stabling, a bowling-green and quoit grounds’ and in 1889 ‘the best house for travellers, no fees, horses and traps for hire, first class bowling green, opposite the Railway Station, Fleetgate’.

In 1893 the enterprising wife of the landlord James Gillender set up as a mineral water manufacturer that was listed in ‘White Swan Yard’ in a trade directory of that year. This may have been in a former ‘cottage’ that was built in the yard in 1868. The mineral water business was carried on by, amongst others Charles Collingwood in 1896, who became well known in this trade.

The pub was still noted as a ‘commercial & posting house’ in the 1920s, and advertised a motor garage and that the pub was the headquarters of the Royal Antediluvian Order of Buffaloes, G L E Lindsey Unity Lodge No.1036. The Buff’s held their meetings upstairs on Mondays at 7:30 pm. Amongst other attractions in the 1920s was the White Swan Bowling Club, which met at the White Swan with George Henry Stocks as secretary. The club and the green remained until after the Second World War. The Barton Town Football team also used the Swan as their headquarters and consequently became known as the Swans. During the 1930s the Swan had a music licence, which was noted in the licensing register to have been ‘for the wireless only’ and that it could be played between 10 am and 10 pm.

Unfortunately it was the Hull Brewery who continued the many alterations to the White Swan, from c.1926, when the interior was changed quite dramatically to the designs of architects Wheatley & Houldsworth of Hull. The building was again altered internally during 1973, when the two smoke rooms were converted into a large ‘lounge’. Toilet facilities were also extended and an exterior staircase added; the works being carried out by Hull builder’s Wrigglesworths. An off-licence or Bottle & Jug Department was situated on the Fleetgate side from an early date, and was still in use in the late 1970s. This elevation had two Georgian bow windows that feature in late Victorian photos, but only one remained after the turn of the century, which is visible in the postcard view shown here. The second bow window was almost certainly lost during renovations the 1926 renovations. The two doors here that led to the Bottle & Jug, had until recently, etched glass windows with the sign of the Anchor Brewery (shown here). This was most likely to have been the Hull Brewery rather than Barton’s own Anchor Brewery. The White Swan has undergone some very unsympathetic alterations over the years but is now afforded some protection by virtue of its Grade II Listed Building status awarded in 1976 and many original outbuildings also survive.

More recently the White Swan was also home to Clair’s 70s Theme Bar (c.2009) but was refurbished in late 2012 following a year of closure, and reopened in 2013.

Photograph from 2002, then a John Smith’s Brewery pub. 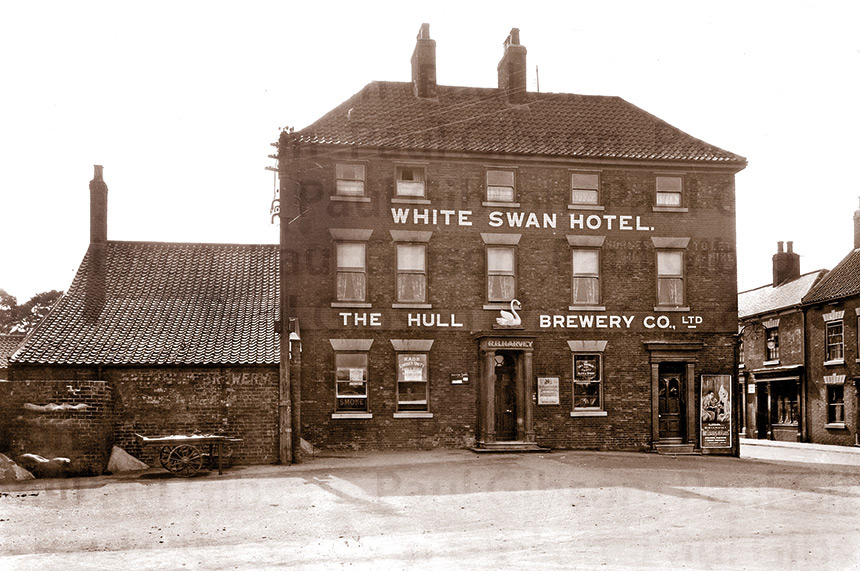 The White Swan as photographed for the Hull Brewery Co, who took it over in 1926. Note the current bay-window extension had not been built at this time. 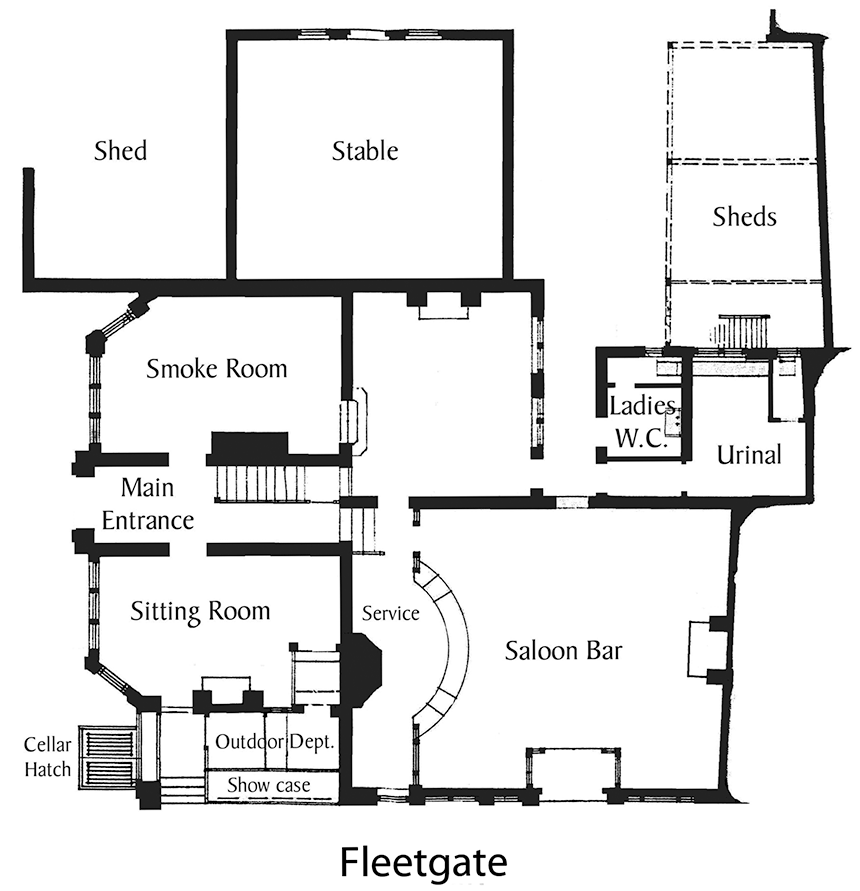 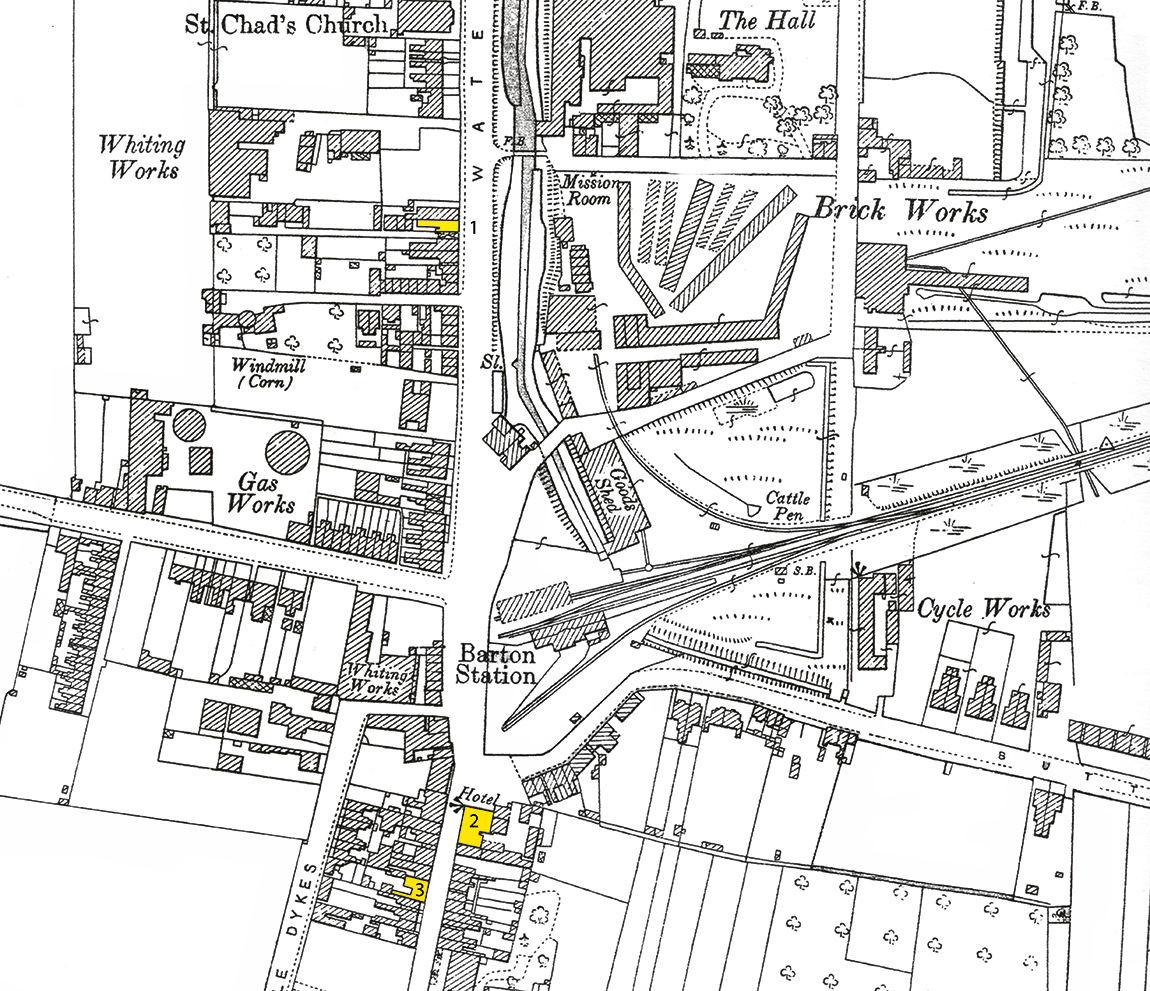