The Lost Pubs of Barton

Some Barton historians suggest there was a pub in Burgate, near St Mary’s church, called the Bellringers Arms.

Writing in 1905, former Barton resident and alderman Thomas Tombleson recalled: - ‘The common way called Swan Lane or Swan Land is named in a deed of 1595. There was a little beer house sixty years ago on the corner of the lane. In 1718 the name of the ‘Swan’ is lost and the street has become Maltman, or Maltmill, or Malthouse Lane, from a ruined kiln which stood on ground now [1905] occupied by the Wesleyan School.’ If Mr Tombleson’s memory was correct, this may have been another of Barton’s lost pubs.

Writing in his ‘Fragments Relating to Barton Upon Humber’ in 1905, former resident John Tombleson recalled: ‘In 1704 there was a house for ale where the Blue Bell is. Four doors further on, same side, is the Cock Inn. The Cock Inn was unoccupied in 1770’.

In 1964 two properties were demolished immediately adjacent to the Blue Bell to create a car park entrance, so this reference (made by a contemporary writer) suggests that one of the two extant buildings with arched entrances north of the former Blue Bell, may have at one time housed the Cock Inn. Many of the properties along this terrace have been either rebuilt or re-fronted, but those two shown here have the potential to be from that period. Detail from a c.1905 postcard view of the street shows the properties relatively unchanged. It is likely from this evidence that the property that may have been the Cock Inn is the left-hand property of the two extant houses with archways through to the rear. 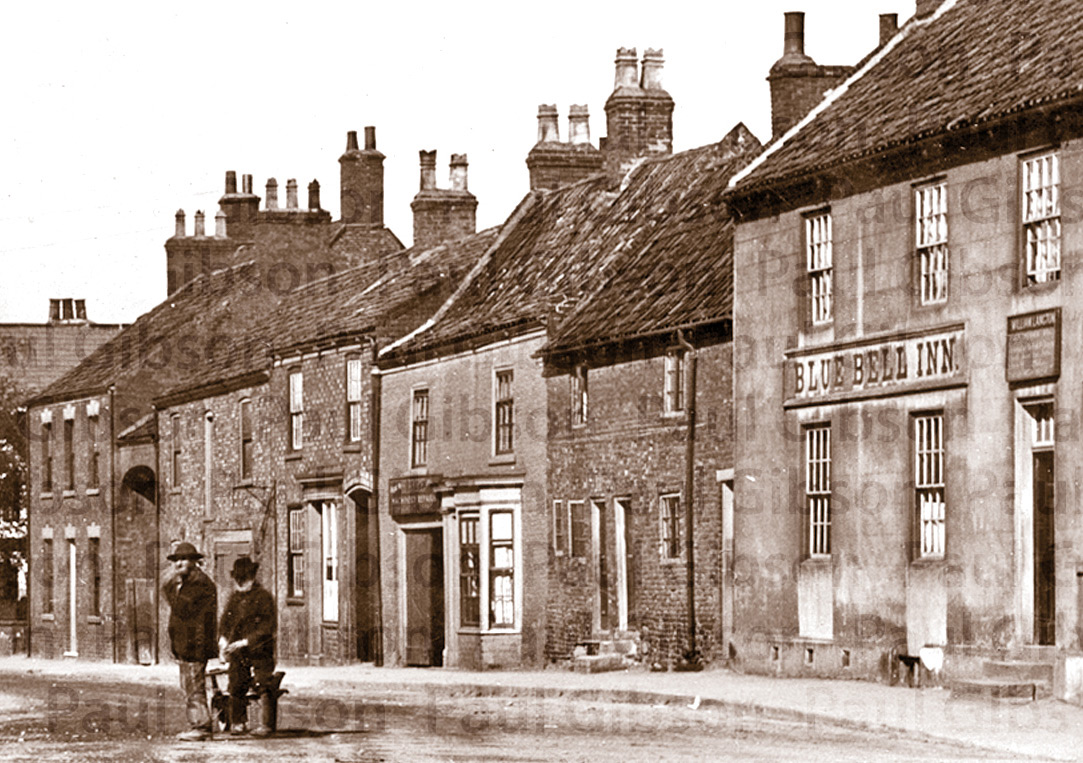 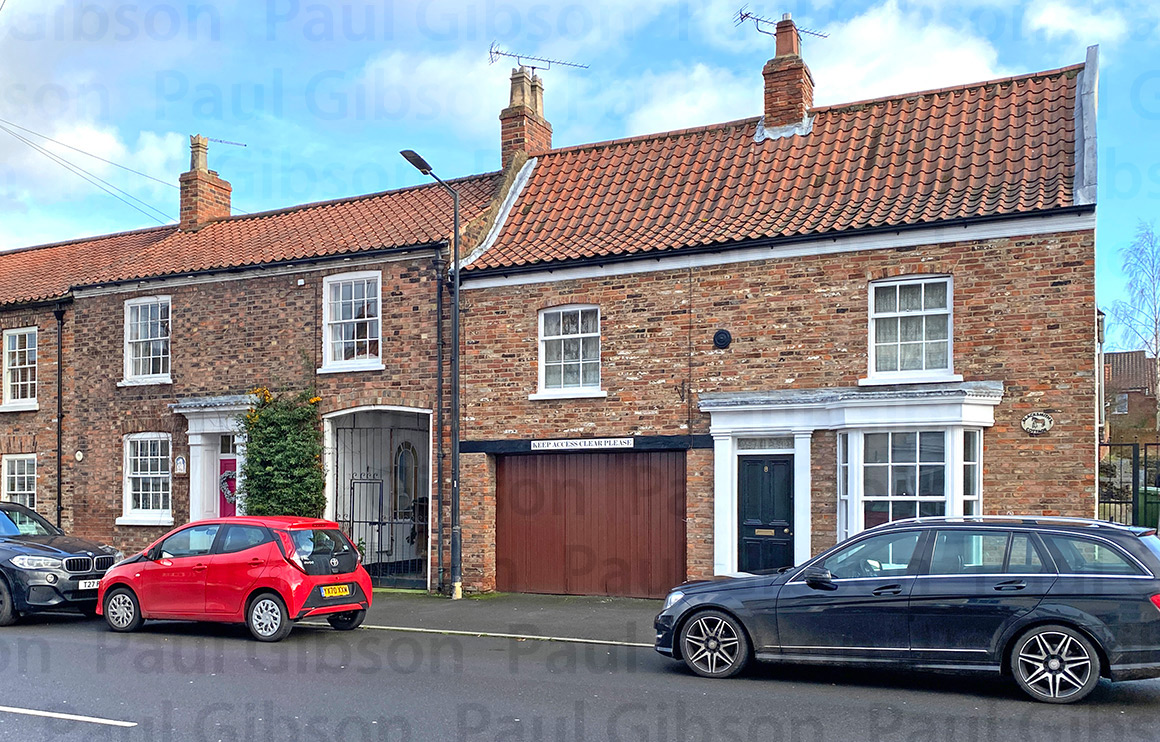 The building that housed the Cock Inn, and possibly the Hand Inn below, may be the left of the extant houses shown here with archways.

In his work on Barton & The Jacobite Rising, historian Martin Clarke notes that in 1745 there was a reference to a pub called the Ferry Boat Inn, in Fleetgate: ‘... confused by events the three highlanders walked to Fleetgate and into the Ferry Boat Inn ...’ Sadly this is the only reference to this lost pub that I have been able to find.

Another lost Barton pub suggested by local historian Mr Ball, and said to have been just to the north of the former Blue Bell Inn, on Whitecross Street. No evidence has yet been found to confirm its existence. Was this also the same premises as the Cock Inn suggested on the Barton website? See Cock Inn above also.

Location unknown. Another lost property noted as a pub by Barton local historians – and said to be opposite the Railway Station. The railway came to Barton in 1855, so this possible tavern must have dated from after that period, but I have found no record of it in census returns, trade direcories or newspapers; this does not mean it didn’t exist, but suggests it may perhaps only have been around for a short time. In the book ‘The Railway Comes to Barton on Humber 1844-1914’, it is noted that the Railway Tavern was one of three pubs in the vicinity of the new station; the other two being the White Swan Inn and the Steam Packet Inn. The book suggests that the tavern was relocated to the corner of Fleetgate and Castledyke West, and closed in 1907 under the previously mentioned Balfour Act. The site, at the northern corner of Castledyke West, is shown vacant on the Ordnance Survey plan of that area, drawn in 1908.

In November 1884 the Stamford Mercury reported that a temporary licence had been granted to Frederick Cobb for the Roper’s Arms in Barton. Clearly taking its name from the ropery that was situated nearby. There is no evidence of the Ropers Arms in the earlier 1881 census. Later, in January 1885, the Stamford Mercury reported that the licence of the ‘Roper’s Arms Inn, Barton, was again transferred to Fred Cobb’. In the Hull Daily Mail of 22 April 1886 it was recorded that a ‘temporary licence was granted to William Knapp for the Roper’s Arms Inn, Waterside, Barton’. The last known mention of this as-yet-unlocated old pub, was in the Eastern Morning News in October 1889, when it was recorded that the licence of the Ropers Arms was transferred to John Slater. By 1891 John Slater was recorded as the victualler at the Royal Vaults pub in Waterside Road – was this the date for the closure of the relatively short-lived Ropers Arms?

I suspect the location of the lost pub was probably in the vicinity of the Royal Vaults pub.

Several 17th century coins (known as trade Tokens) exist for Barton, including two for the Swan Inn (see Swann Inn page in featured pubs) and one half-penny alloy coin with the legend GEORGE BROWN and the image of a Stag in the centre of the coin. The reverse notes the date of 1669, and OF BARTON, with HIS HALFE PENY in the centre.

The name George Brown is also mentioned in the Church Warden’s books at St. Mary’s Church in Barton, where it is recorded that a meal was held at the ‘mine host George Brown at the Stag Inn’. The name Stag Inn may well have been an earlier name for one of the older Barton pubs that are already listed on this website, but under a more recent name.

The dates within the Church Warden’s book suggest the Stag was in use as an inn during the 1640s, and given the fact that the coin is dated 1669, the inn must have been of reasonably long-standing.

Trade tokens were issued from the early part of the 17th century owing to a shortage of regal coinage; the shortage was mainly confined to farthings and led many traders and innkeepers to strike their own coins. As it was innkeepers who issued many of the earliest tokens, they have become known as Tavern Tokens or Inn Tokens. In 1672 the issue of regal farthings commenced once more and all other coinage was declared illegal.

Courtesy of the Trustees of the British Museum

Location unknown. The 1822 trade directory listed William Tong Meggitt at the Three Tuns, in Fleetgate in its ‘Taverns & Public Houses’ section. He was also listed as a ‘Liquor Merchant’ in Fleetgate. It may be that Mr Meggitt simply had a licence to sell his wares on the premises. Meggitt was also noted as a Brandy Merchant in an 1813 news report of his daughter’s marriage.

The three tuns (large wooden barrels, usually for storing wine) was a commonly used pub sign, deriving from its origin as the sign of the Worshipful Company of Vintners (established in the 14th century). Often pubs would have three small barrells hanging as a sign, or as an accompaniment to another inn sign.