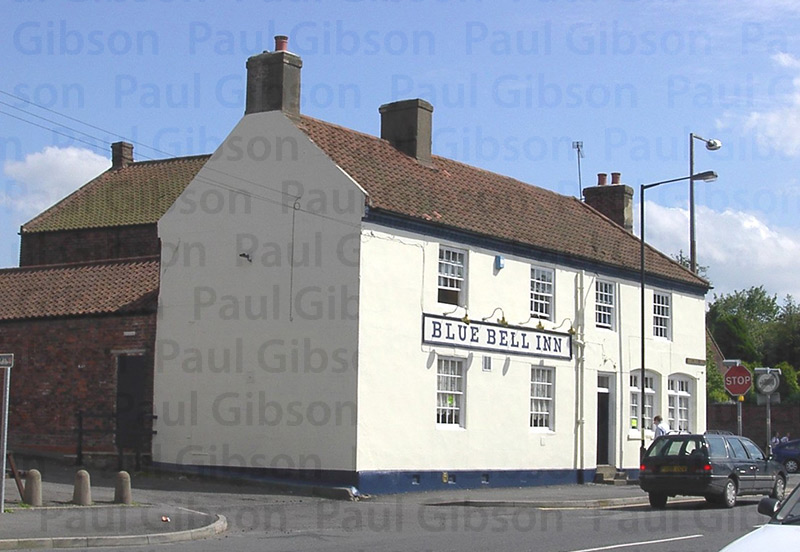 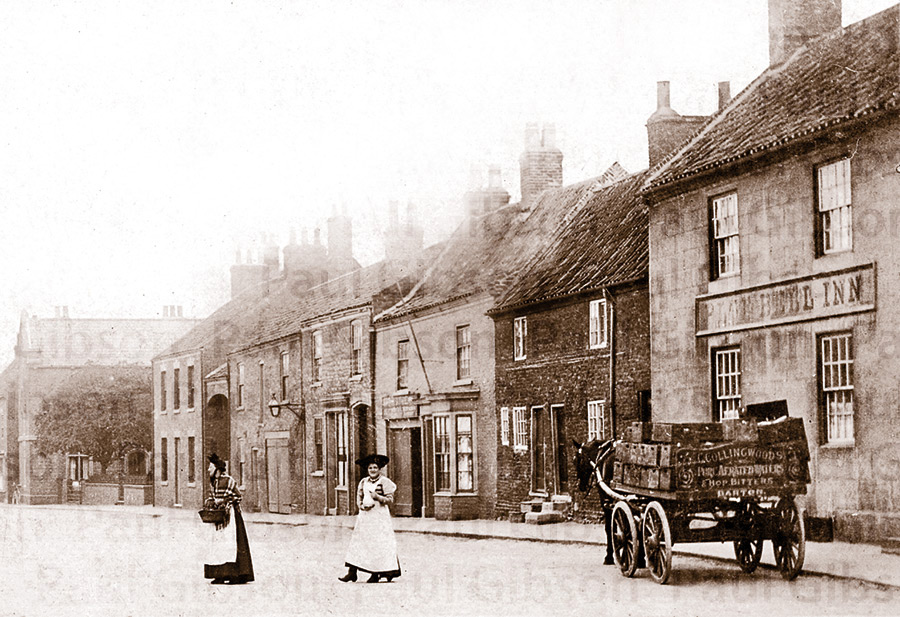 A Collingwood’s cart alongside the Blue Bell c.1905, no doubt making a delivery of their ‘aerated waters’. Note the two old cottages next door to the inn, demolished in 1964 to give access for car parking.

Just beyond those, either the building with a flag pole or the one adjoining with a large lamp, may have been the site of the Cock Inn (see page 24). 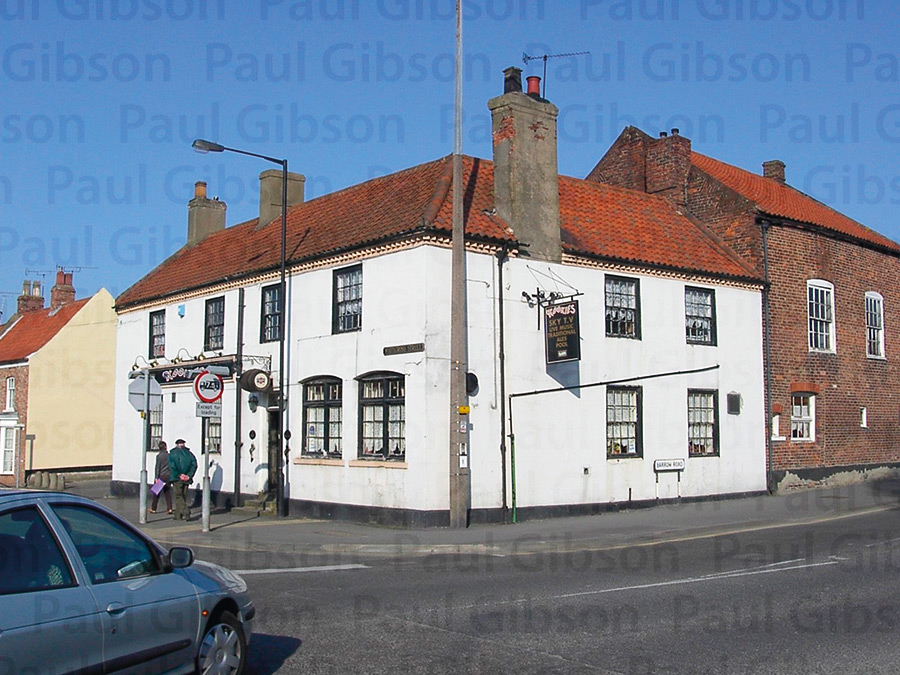 Also known as the Six Bells, and Kookie’s.

Situated at the corner of Whitecross Street and Barrow Road, this former inn was adjoined by two small cottages on its north side that were demolished to create parking facilities in 1964. The building itself gives little evidence of its age although it is almost certainly Georgian; a cogged line of bricks at eaves level, and window frames almost flush with the exterior of the building, are details that may suggest the late 18th century. The building’s original frontage was spoilt in the late 19th century when the two arched windows to the right of the entrance were added, but other than this and some more recent redecoration, the exterior is relatively unchanged. Curiously, although the front eaves course of bricks is cogged, i.e. set diagonally, the rear eaves course is dentillated, i.e. set on edge – square to the building. This may suggest the building is of two periods.

The pub is mentioned in the 1791 directory entry for Barton, when John Hall junior was listed as ‘Farmer & Victualler’ at the Blue Bell Inn. Some years later the Hull Advertiser of 28 May 1847, held a report of alleged poor management at the Blue Bell:

‘Thomas Good, the landlord of the Blue Bell, Barton was charged by Cuckson the constable, with allowing tippling in his house on Sunday 7th ult., during the hours of Divine Service. The case was dismissed in consequence of there being no proof that people were drinking at the time that the constable entered the house; or that any spirituous liquors had been drawn for them after the church service had commenced. Good received a caution to behave better in the future.’ (sic)

Thomas Good, who had been at the pub since at least 1847, is listed in the 1871 census as a 69-year-old innkeeper, resident with his wife Fanny aged 67, at the Six Bells in Whitecross Street. This is the only reference I have found to this pub being called the Six Bells, and it may have been an error on the part of the census enumerator. However, I record it here for the sake of completion.

Licensing records show that the Blue Bell held an ordinary alehouse licence in 1932, and was owned by Hewitt Brothers of Grimsby, who had owned it since at least 1900; in that year records show the brewery made a series of alterations at the pub. It had earlier been the premises of a tailor, who also traded as a victualler and butcher.

The building was awarded Grade II Listed Building status in 1966, in recognition of its architectural importance to the town, but this was too late to save the adjacent cottages to the north.

The name Kookie’s supplanted the long-standing name Blue Bell Inn in 1997. Fortunately, Kookies underwent well-needed external renovation during April 2002, the same year in which it was described quite succinctly as being ‘for the very young’, on a tourist Internet site. Thankfully, following the renovations it reverted to its historic name, and from July 2002 was known as the Blue Bell once more. Further renovation and re-decoration was carried out in 2004, and the Blue Bell never looked better. More recently, following a long period of closure (since 2012) the pub stood almost derelict until the spring of 2014. Full planning permission had been granted in 2012, to erect six dwellings on the car park, and to convert the main buildings of the former Blue Bell Inn into six further dwellings. Planning permission was initially refused, on the grounds it would affect the character of the Listed Building, but permission was eventually granted – including plans to demolish part of the rear of the building. The project was underway during the summer of 2014 and the attractive new houses were completed by the winter of that year. Sadly, this involved the loss of the large adjoining building at the rear, which had at one time been used as a theatre.

Some references to the Blue Bell: 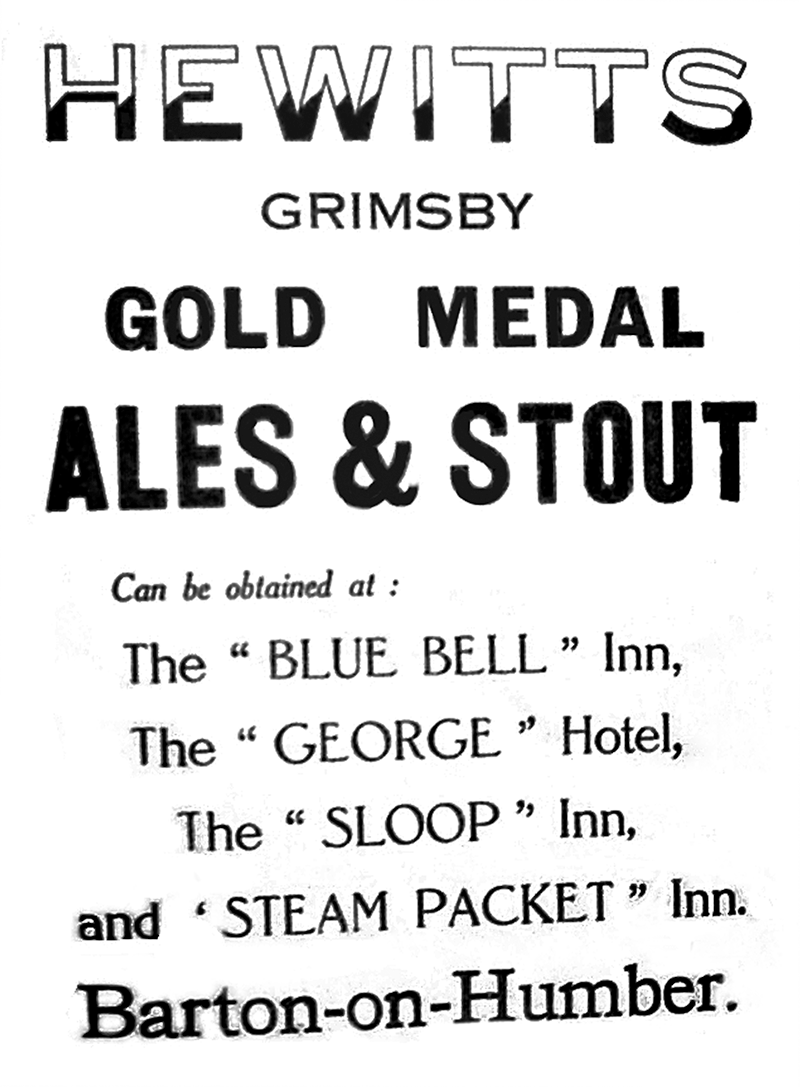 The advertisement dates from c.1935, and shows some of the Hewitt Brothers brewery pubs in Barton at that time. 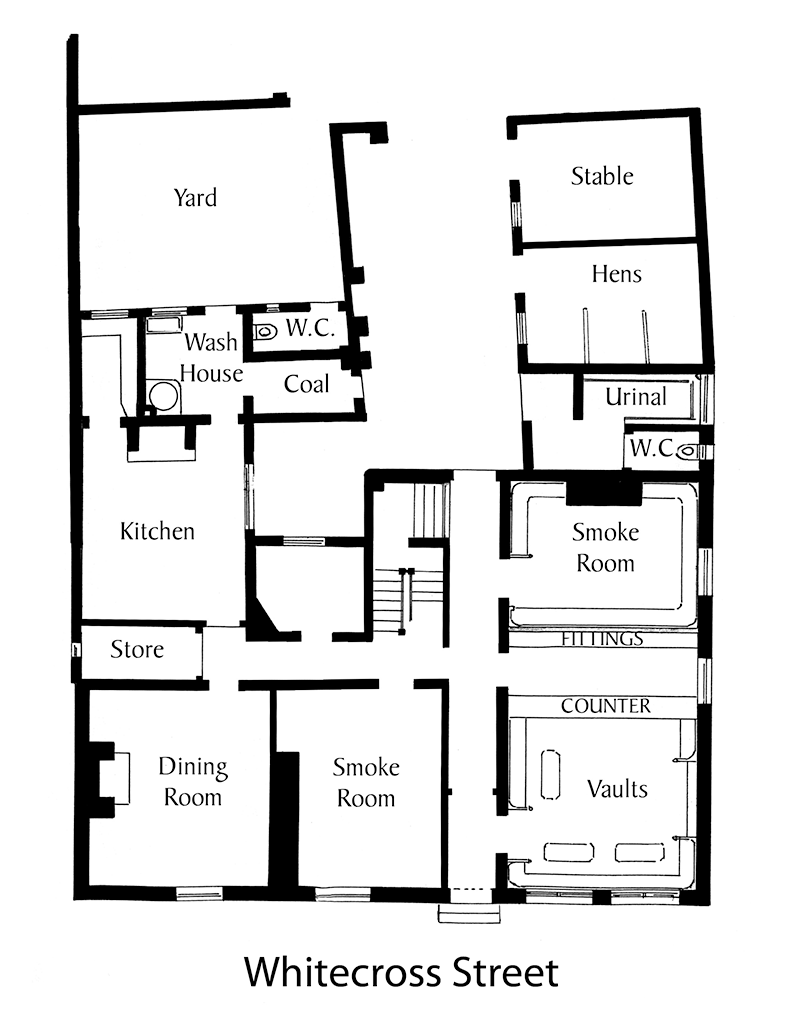 This is the earliest floor-plan of the Blue Bell that I have been able to find, which shows the pub as it was c.1900.