The Red Lion first appears by name in the Stamford Mercury of December 1790, when a notice appeared regarding a ‘Bay Mare’ that had been found tied to a fence outside the town. Whoever could lay claim to the horse was to contact: ‘John Houlton, at the sign of the Red Lion in Barton’. (sic) In the Hull Packet of 16 December 1842 the Red Lion was described briefly:

‘To be offered for sale by private contract ...

The Red Lion was another coaching inn that offered ‘Good Beds and Excellent Stabling’ in another advertisement in the Barton Observer in the 1850s. Architecturally the building has an attractive and interesting exterior that was added to the front of an older shell in 1924. It is relatively intact except for the loss of two timber pediments, which stood atop both bay windows on the first floor.

The Red Lion was another coaching inn that offered ‘Good Beds and Excellent Stabling’ in another advertisement in the Barton Observer in the 1850s. Architecturally the building has an attractive and interesting exterior that was added to the front of an older shell in 1924. It is relatively intact except for the loss of two timber pediments, which stood atop both bay windows on the first floor. 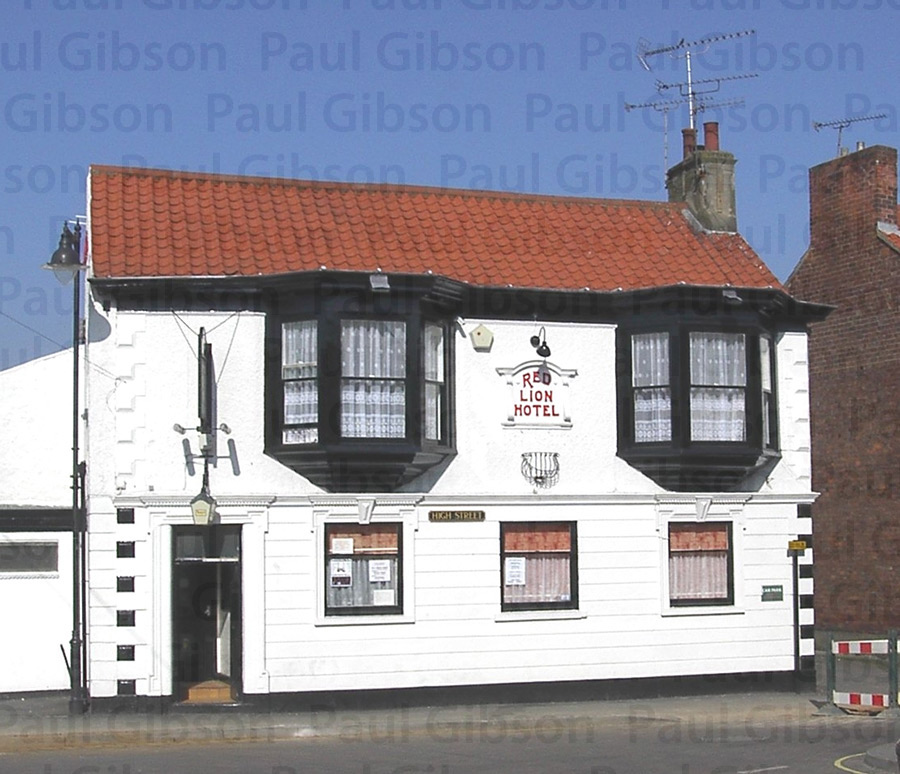 The Red Lion, High Street (Junction Square) as shown in my photograph from 2002. Note the beautiful wall plate dating from the late 1920s or early 1930s.

The shouldered architrave around both original ground floor windows and door are unique in Barton and very stylish. The distinctive architecture, which is unlike any other pub in Barton, may be attributed to the fact that a non-local brewery – Fox Brothers of Crowle – owned the pub until 1931 (licensing records); it is likely they used an in-house architect. Plans for alterations that were carried out in 1924, were submitted by James Fox & Son of the Isle of Axholme Brewery in Crowle. Their architectural style may be more familiar to the drinkers in their own area, but makes the Red Lion stand out compared to some of Barton’s more mundane pubs. Fox’s old established brewery (founded in 1856) was bought by the Barnsley Brewery Company Ltd in 1949 and their 40 pubs were transferred to the new owner.

The central window is a much later addition and spoils the appearance to some extent. Locals, who would often ask for the key to the toilet when ordering a pint of their bitter, remember Fox’s beer for having many individual and memorable properties according to a former Barton landlord. From c.1915 the Stark family also ran a newsagent’s business from no.58 High Street, next door to the west of the pub; initially it was Mrs Stark who ran the shop. When Fox’s renewed the alehouse licence for the Red Lion in 1931, it was to be short-lived as brewers and bottlers Linsley & Comany of Hull took over the Red Lion in 1932. Later alterations were made in 1938 to the designs of Pontefract architects Pennington, Hustler & Taylor.

Around this time the Red Lion transferred to the Barnsley Brewery, who’s sign can be seen in the photograph opposite. More recent owner’s John Smith’s Brewery refurbished the pub in 1987, and in 2012 it was closed for two weeks for another well-deserved refurbishment.

Some references to the Red Lion: 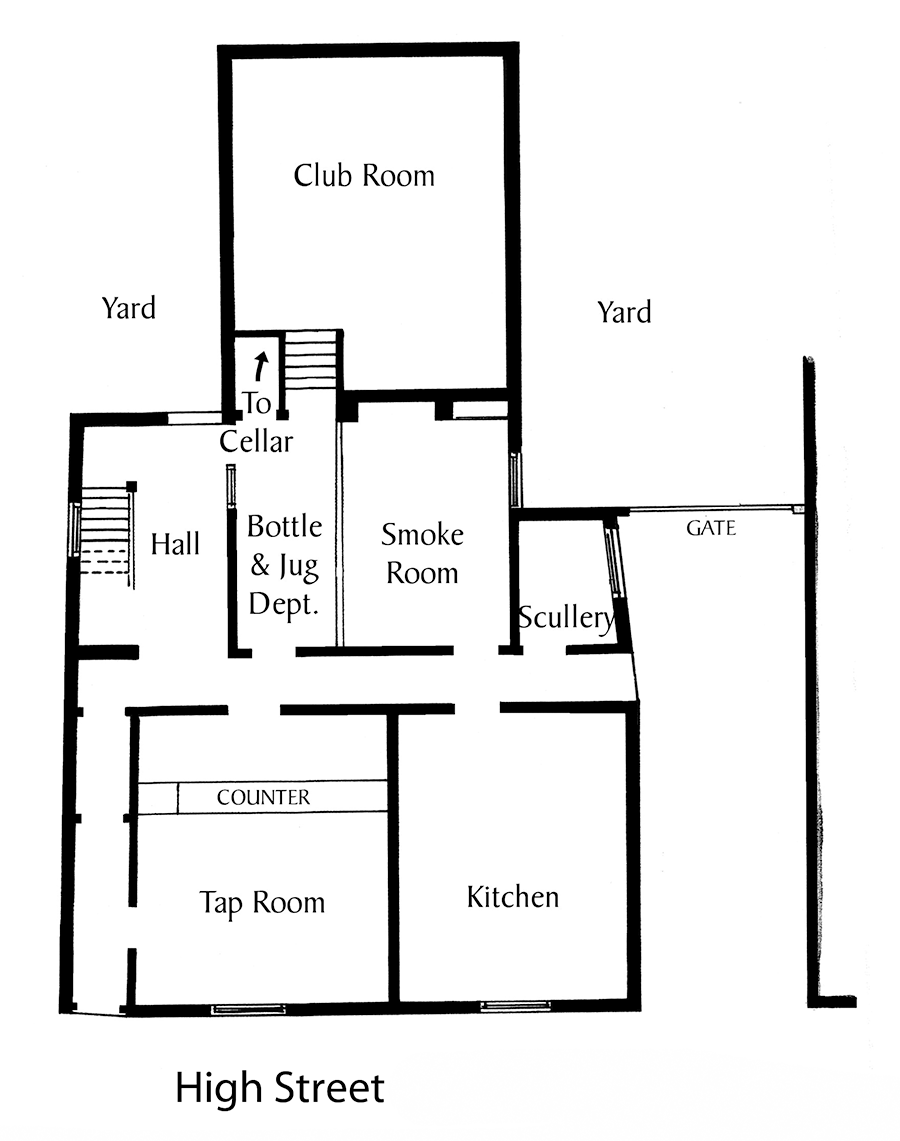 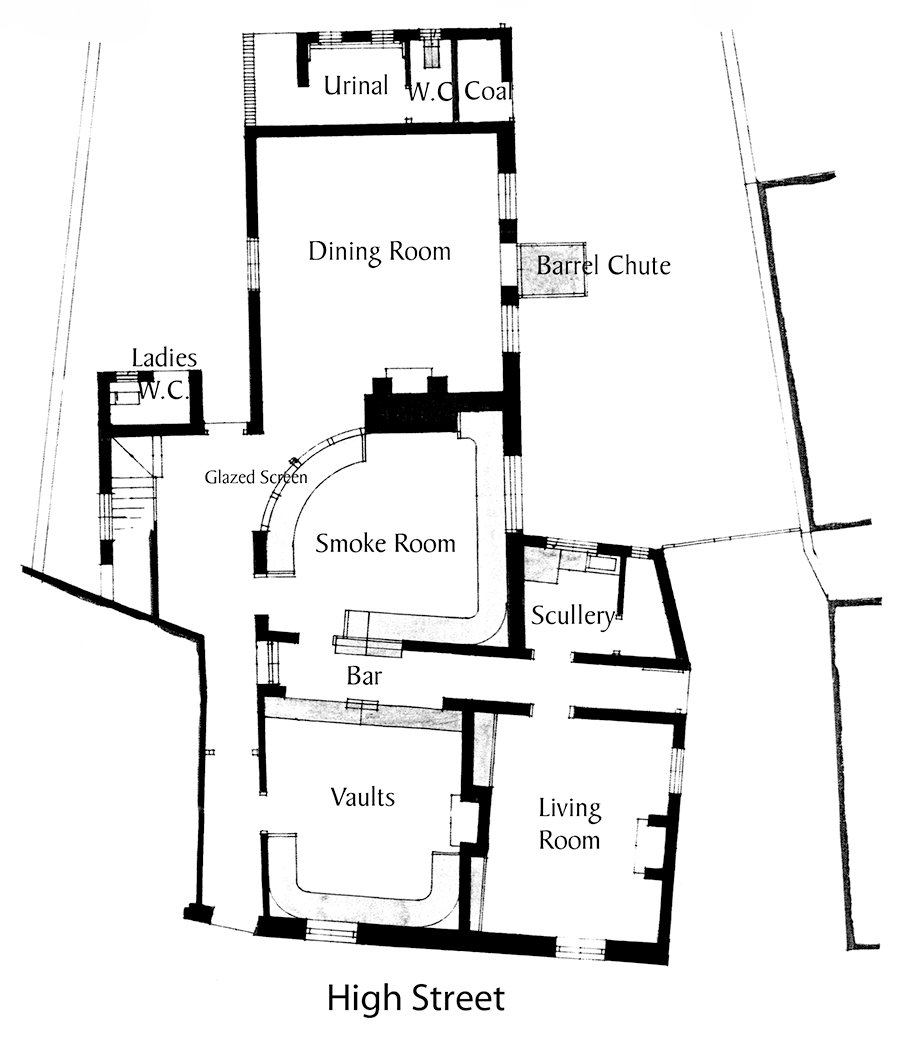 Two plans re-drawn by the author, showing some of the alterations to the Red Lion that took place in the 20th century. Shown top is the layout of the pub c.1924, which probably hadn’t changed much since the building was constructed. below that is a plan from 1938 showing the major alterations that took place at that time. Note the kitchen overlooking High Street became a living room, and an enlarged smoke room that required the loss of the ‘Bottle & Jug Department (off-licence). Ladies toilet facilities were also added, as well as an improved gents.

The Red Lion as seen in the 1950s, note the sign advertising Barnsley Brewery’s Oakwell Ales. 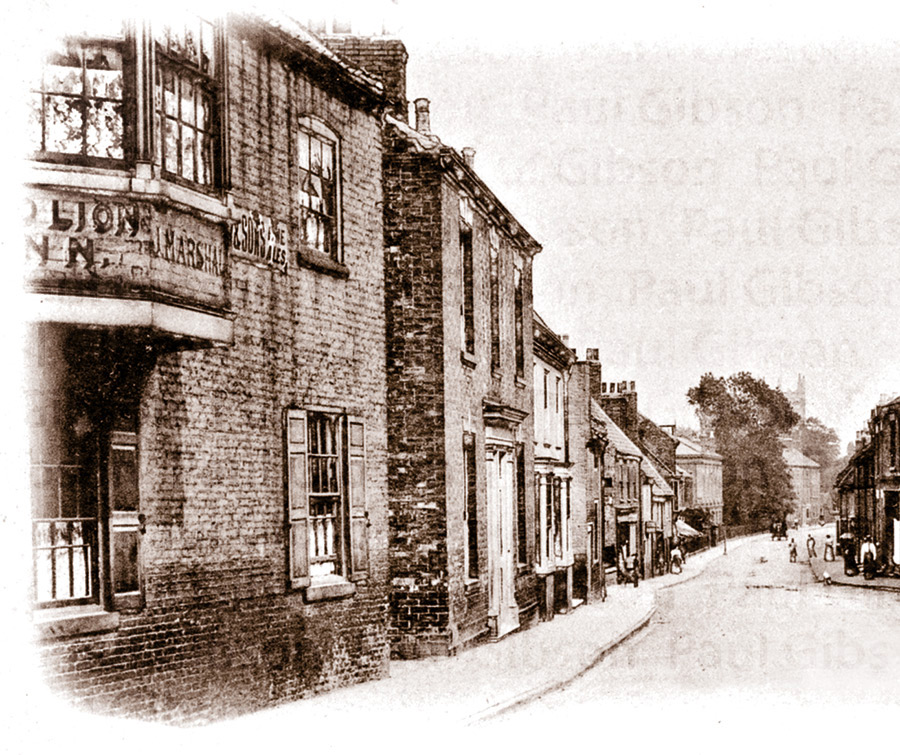 The Red Lion (on the left of the picture) with its original plain brick frontage c.1903. 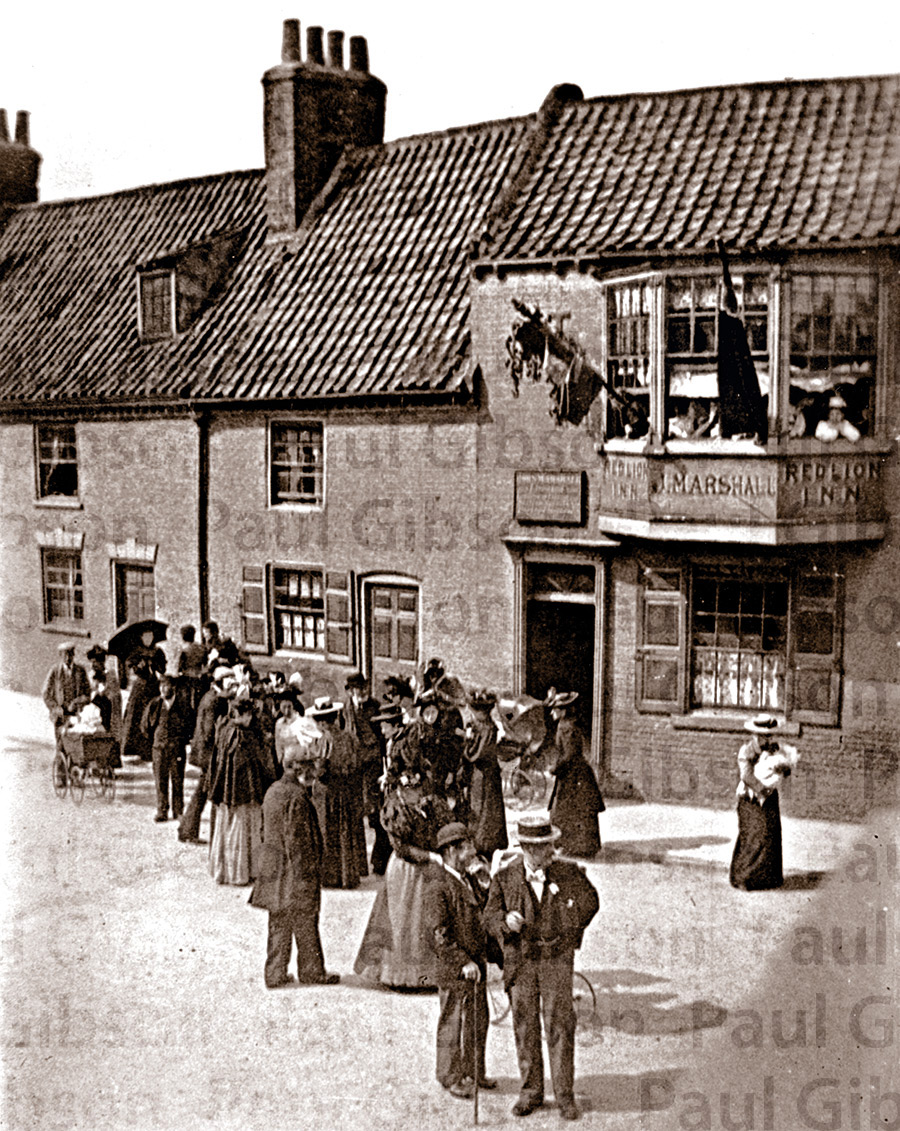 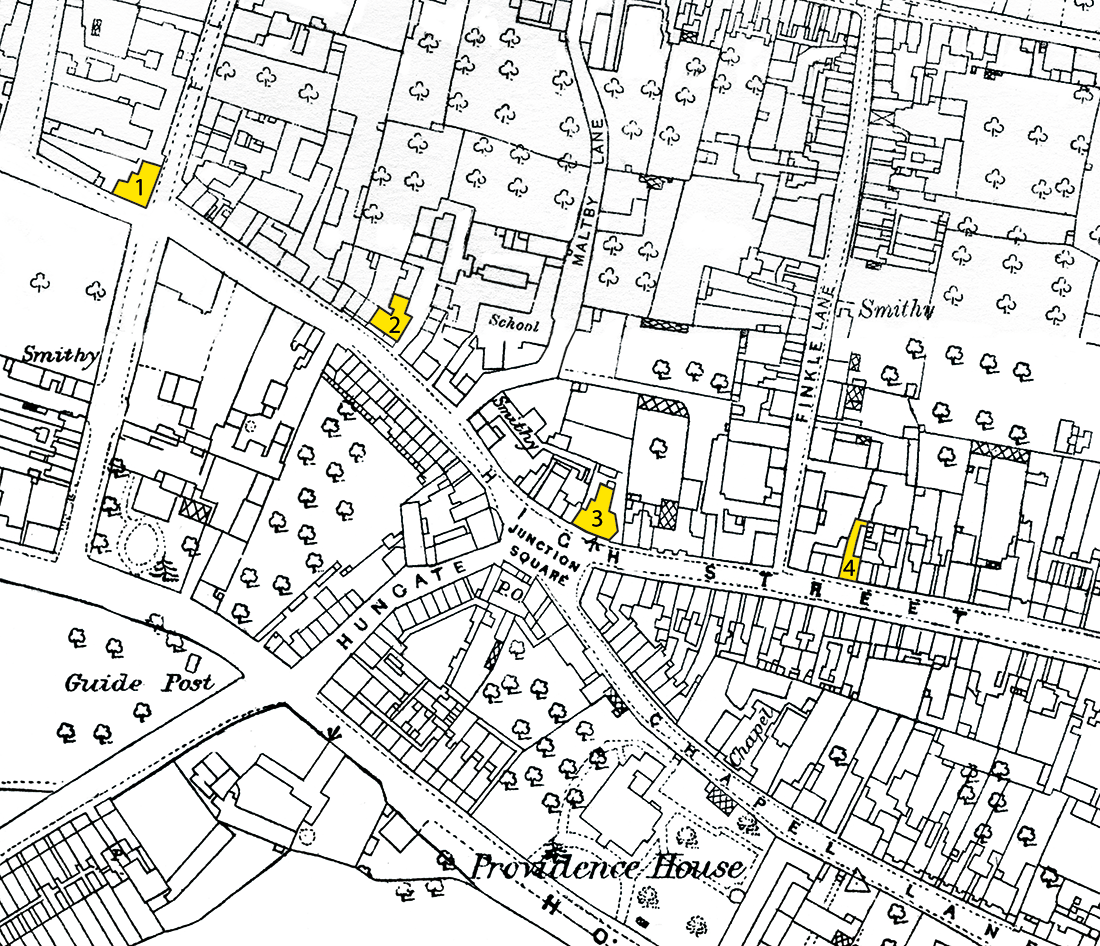