According to historian Henry William Ball (writing in 1856) in 1732 the George Inn – then known by the sign of the Queen’s head – became the property of Sir Henry Nelthorpe, and was later also known by the sign of the George & Dragon. These are the earliest references to the George that I have discovered thus far. The main corner building dates from the 17th century and was the venue for many social and political events in the town. It was also mentioned in 1745 churchwardens books when ‘the men from their coal holes and women … held a meeting at the George Inn …’.

The mid-19th Century billhead from the George below shows it was at that time a simple Georgian building, typically symmetrical in appearance with a frontage of only three bays. The corner building was originally of square plan with a hipped and pan-tiled roof, which was extended with a later wing to the north along George Street. The hall and a staircase, said to be of c.1690 with vase shaped balusters supporting the hand-rail, are some of the notable surviving interior details. 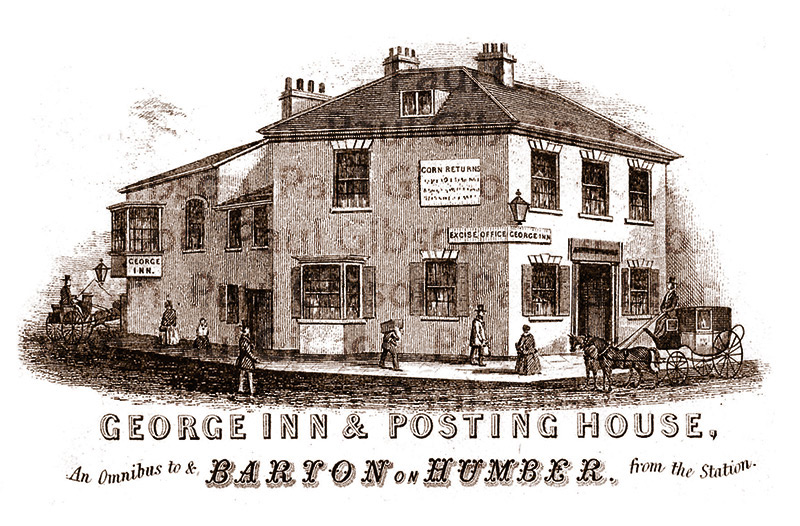 An engraved billhead from c.1850s (author’s collection), showing the George before turn of the century alterations.

George Street used to be known as the Old Market Place (1851 census) as the Market was previously situated on a site between George Street and the Butchery. The fact that George Street was possibly re-named after or along with the George Inn suggests that it was in existence when the earlier market was in operation. The earliest newspaper reference to the George appears to be this wordy article from the Hull Advertiser of 28 May 1824:

Most respectfully acquaints Commercial and Farming Gentlemen, his numerous Friends, and the Public in general, that he has removed to the George Inn, where he will be happy to see them in the future.

This well established concern being in the Market Place and centre of the Town and the London Mail and Express Coach, daily passing by, renders the George Inn peculiarly adapted for the transaction of Business, and a local convenience to such as occasionally take the route through Barton to the Metropolis. He has laid in a good stock of choice flavoured Wines, Genuine Spirits, and excellent Ale and Porter, which with good beds and Stabling, he trusts will enable him to offer superior Accommodation, and that the same will give the utmost satisfaction to all his future Customers. It is his fixed determination to conduct the George Inn on the most liberal principles; he therefore informs Commercial, Farming and all other gentleman who may have occasion to make a temporary stay at Barton, that it, will be his pride and pleasure, by a uniform and strict observance of their commands, and unremitting attention to their comfort and convenience, to merit their patronage and support.

J.I. offers his grateful acknowledgments to all his kind Friends, for their generous support during a Nine Years residence at the Swan Inn.

The Hull Packet of 26 July 1833 held a ‘to-let’ notice in which the inn was described as follows:

‘The George Inn ... comprising thirteen lodging rooms, a very commodious room for the Market ordinary ... commercial and other convenient rooms on the ground floor, bar, kitchen, cellars, stabling for sixty horses, coach house, farm buildings and yard adjoining, and a close of excellent pasture land where a sheep market has been established upwards of thirty years.’

In 1854 the George Inn was sold by auction, and in the details of the sale the inn was again described:

‘The Old Established George Inn in Barton with stable, yard, farm-yard, barn, stabling for sixty horses, loose boxes, carriage house, with Billiard room over the same, brew house, granary, and other requisite out-buildings; Corn Inspector’s office and druggist shop adjoining. Together with the paddock of rich Pasture Land, within a few yards of the house; garden, stack yard, and conveniences, thereto belonging, containing 2a. 0r. 25p. The house comprises a commercial room, news room, bar, tap room, evening room, good kitchens, pantries, and cellars; 12 lodging rooms and a large dining room, 51 feet by 20 feet, used as a market ordinary room, and for public occasions. The excellent fortnightly sheep market is held in the paddock and the beast market adjoins the same; and the former affords a good return for the provision of pens for stock.’ (sic)

The purchaser of the Inn, Mr Alfred Moss previously of the Waggon and Horses Inn, Fleetgate, announced later that he would continue his ‘wholesale Ale and Porter brewing’ on the premises, and continue with a ‘Market Ordinary’, held every Monday. An ‘ordinary’ was, amongst other things, an eating-house where a regular public meal was provided at a set price, and usually at a fixed time.

The former George Hotel paddock and beast market is the site of what is now housing at ‘Beretun Green’. It was also used as a site for the annual fairs. The F Hopper Cycle Works Band is known to have played in the George Hotel paddock on a Sunday afternoon during the summer months before the First World War and another band, the Barton Prize Silver Band, used a room at the George for practice. 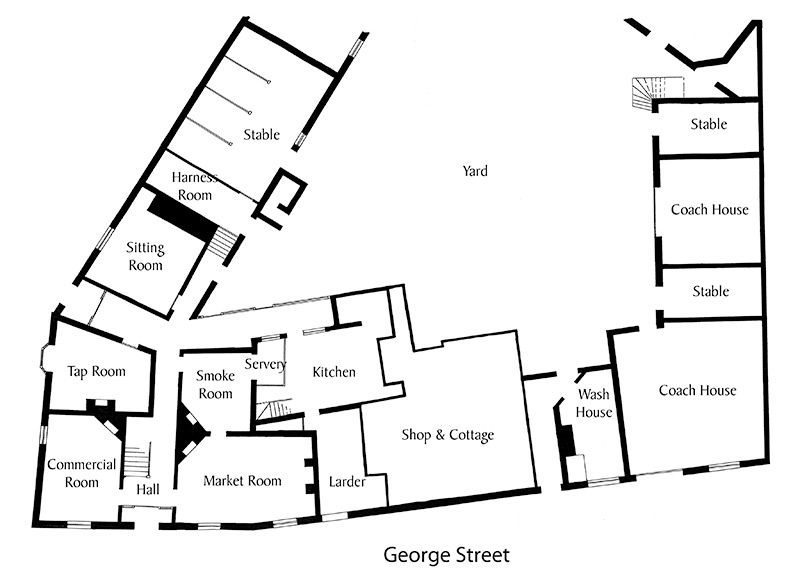 A re-drawn plan dating from c.1901, showing an older layout of the George Hotel. Note the large coach houses and stables to the north (right). It was at this point that the new double gable roof was added, and the brickwork rendered for the first time. 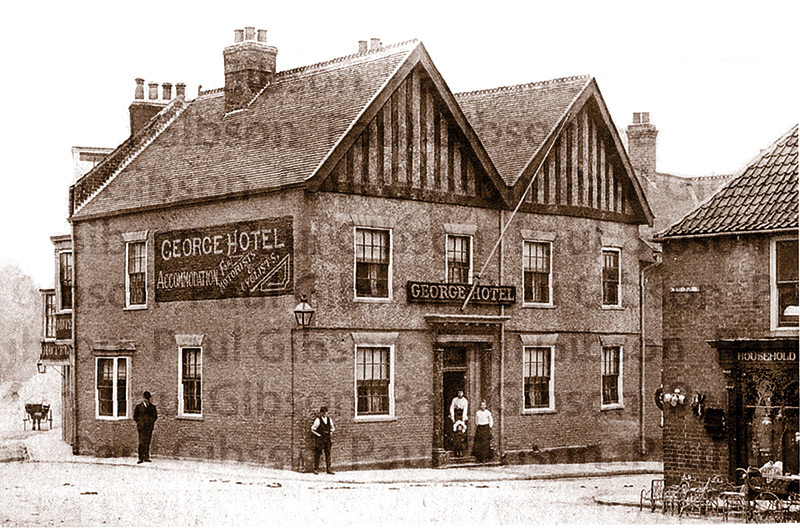 The George Hotel soon after renovation and rebuilding work, as seen from the Market Place c.1905. Note the huge sign advertising accommodation for motorists and cyclists on the south wall.

It would be interesting to find evidence of the former ‘brew-house’ within the site, as the George was one of many of Barton’s pubs that once brewed its own beer for customers on and off the premises. Keen to attract new business to the business to the hotel, the new landlord in 1855 was quick to accommodate travellers from the new railway station in Barton, as this notice from the Hull Advertiser of 15 December 1855 reveals:

‘Mr Moss, of the George Inn, has commenced running conveyance from his house to the Railway Station, meeting with the different trains for the transit of passengers, parcels, &c., which will be a great convenience to commercial gentlemen and travellers generally.'

This was a service Mr Moss obviously maintained for many years, as the 1881 census recorded two of the four resident servants at the inn as a ‘bus driver’ and another as an ‘ostler’. The victualler in 1870, Mr James Story, submitted plans to the ‘Local Board’ for alterations to the south elevation. It was at this time that the former lower part of the building next to the inn on Holydyke was raised, and the surviving oriel window added.

‘Gentlemen, I beg leave to submit sketch of alteration to the George Inn, to raise the low portion on the south side and put out a Bay Window up stairs 10 feet above the flagged causeway … I shall be obliged by your early attention and sanction, yours obediently, James Story. Barton, 30th May 1870.’

By 1903 the George had been acquired by Hewitt Brothers Tower Brewery of Grimsby, who maintained its full alehouse licence until at least 1932. Sadly the George has been rendered and painted in the early 20th century (probably during the rebuilding that resulted in the now familiar double gable frontage), and its original brickwork is obscured, however it has a number of architectural details that appear to span a wide range of dates. Some of which may suggest the building is older than it first appears and is worth much more detailed investigation, as it may well be one of Barton’s oldest pubs and is certainly one of the longest continually held licenses held in the town.

In its 1960s advertising literature the George was somewhat generously noted as ‘one of the 80 ancient inns of Great Britain’. Despite being a Grade II Listed Building since 1976, this former coaching inn has undergone some rather unsympathetic alterations over the years. None of this has affected its popularity, which has been maintained throughout its colourful history. It was renovated again in 2012 in a much more sympathetic style, and following another period of closure in 2018, has recently reopened once more. 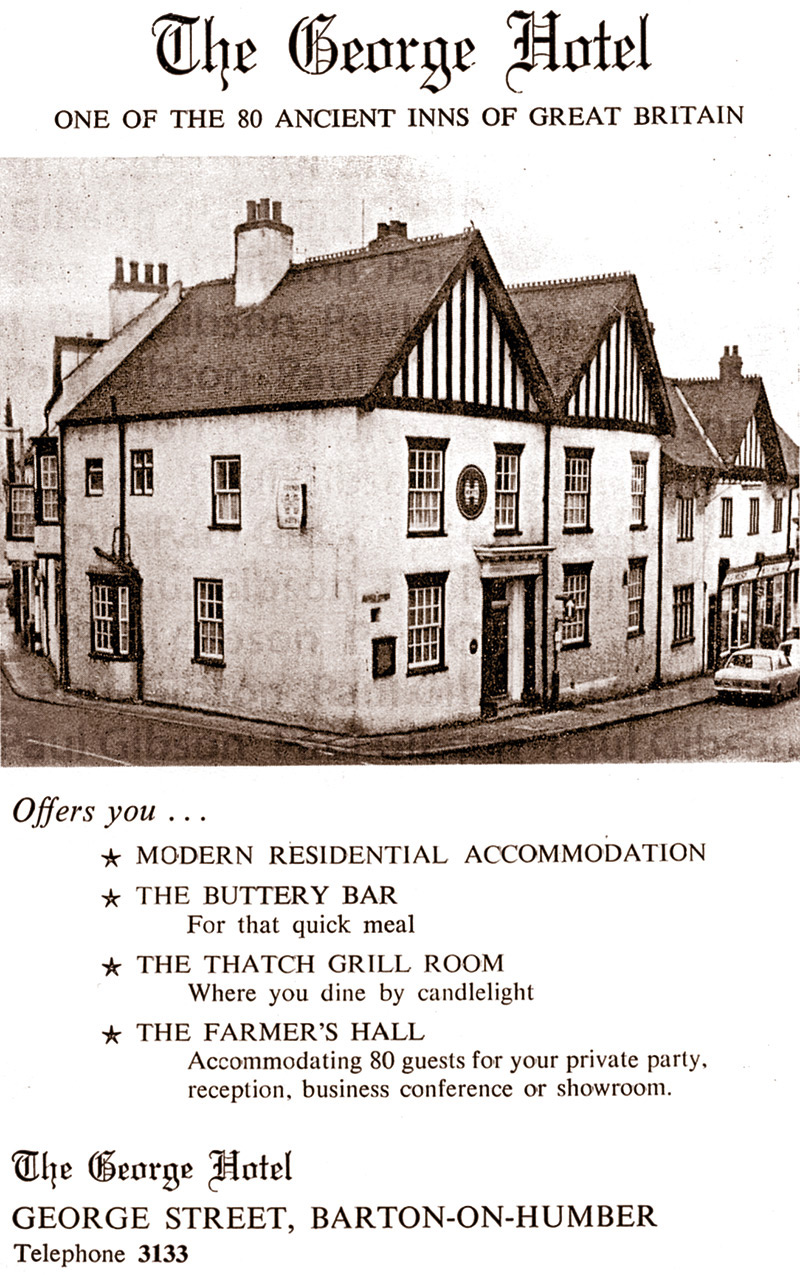 The George Hotel as described in 1969 literature 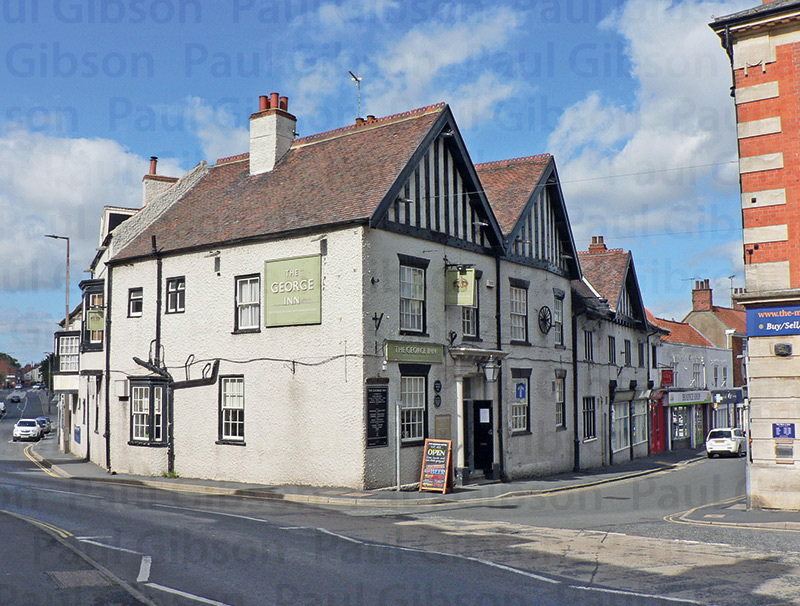 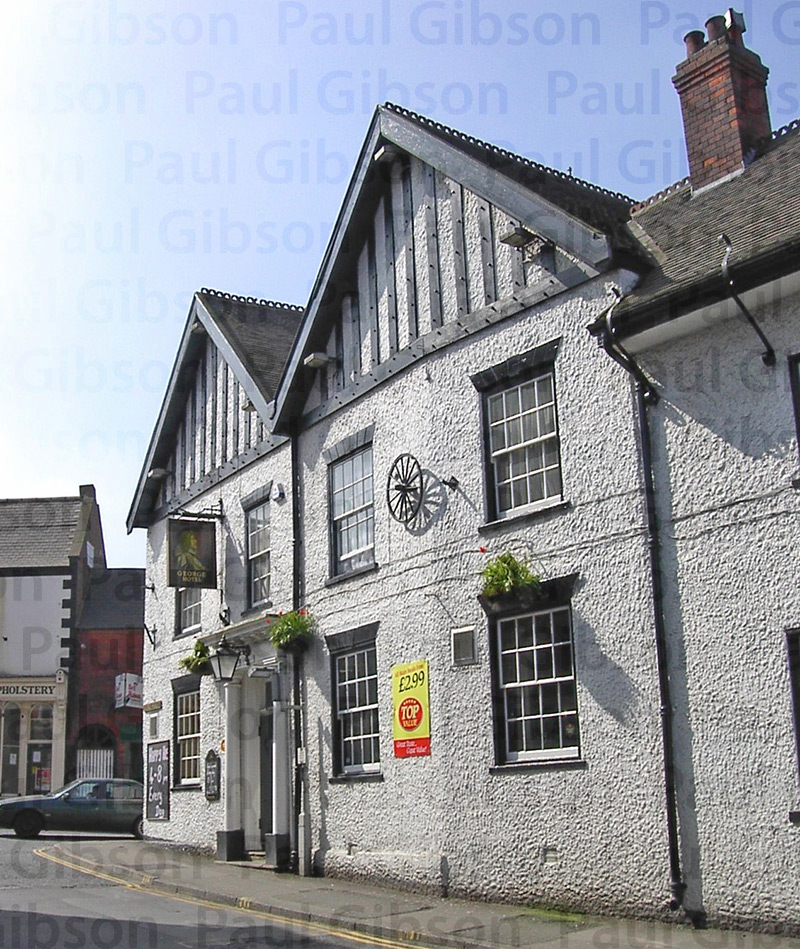 Some references to the George: