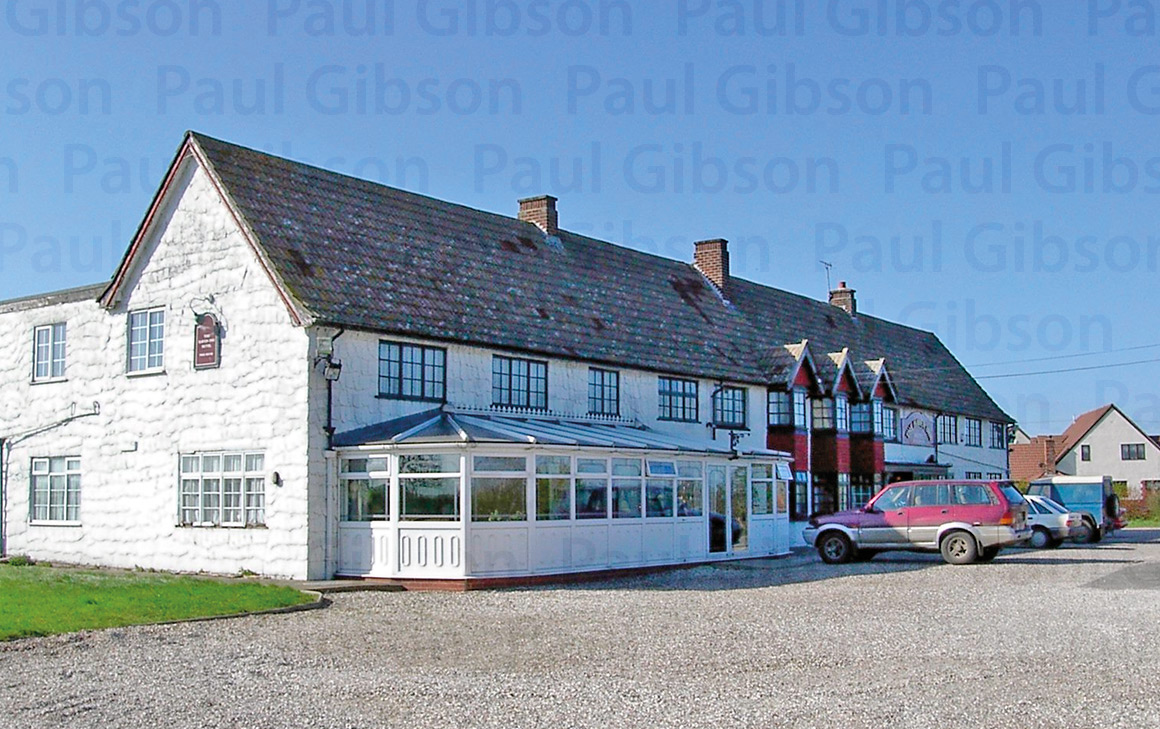 The first known record of a ferry from Barrow Haven was c.1371 when Thomas Crispin was charged with setting up an illegal ferry that would diversely affect the long established Barton and Barrow services. Wherever there was a ferry more often than not there would be a pub - often this would be where the ferryman would live, and Barrow Haven was no exception.

Barrow Haven was a thriving port in the early 19th century, as suggested by an entry in Pigot & Cos directory of 1835: ‘Great quantities of corn are shipped from Barrow Creek, called ‘Barrow Old Harbour’, about a mile from the village; and a considerable trade in coal and bricks is carried on by means of this inlet’. Many years later, during the 1980s miners’ strike, the small inlet was once again used to bring in coal. But that is another story entirely.

The Haven Inn is still open for business and serving the local community as it has for 200 years or more. It’s first listing by name in a trade directory appears to have been 1856, although it is likely that it had been in existence many years prior to this. It appears to be shown clearly on the 1824 Ordnance Survey plan of the area.

Although it is now a long narrow building it was probably much smaller in length in its first incarnation, possibly of only three or four bays. Previous owners have rendered its entire surface, making an assessment of its original appearance extremely difficult.

In 1863 the Haven Inn was advertised for sale in the Hull Packet newspaper, when it was described as: -

‘All those VALUABLE PREMISES, known as the HAVEN INN, at Barrow Haven, on Humber, with the Outbuildings, Garden and Paddock adjoining the same. The Ground Plot contains 3 rods and 4 perches, or thereabouts For further particulars apply to Mr STOVIN, the Owner, on the Premises; or to the auctioneer, Exchange Sale Rooms, Hull.’

In 1904 the Haven Inn was the location for an important piece of sports history when the North Lincolnshire Football League was formed here in July of that year (because the Hull and East Riding League have decided “not to admit Lincolnshire clubs in the future’. The ‘chief mover’ in the formation was Mr Clarke, secretary of the Barrow Haven Rovers football club. Also present were representatives from other local teams, such as Barton Old Boys, Barrow Wanderers, Goxhill All Saints, and Barton St Peters.

The Tower Brewery of Tadcaster (probably John Smith’s) was noted as the owner when its licence was renewed in 1932 at which time it held a full ale-house licence. More recently a local tourism website described the Haven Inn as ‘an olde worlde inn with beamed bars dating from 1740’. However no source is given for this information and so it is noted here for interest only.

Some references to the Haven Inn: -

The Nags Head was almost certainly an earlier, or colloquial, name for the Ferry Inn, which had probably been in existence as long as there had been a ferry at the Haven, and was shown on the 1824 Ordnance Survey plan. During the 1840s the same family were listed at the Nags Head and Ferry Inn in the space of seven years and “Ferry Inn” was probably a more familiar local name for the Nags Head, or vice-versa. The inn had good custom as this newspaper article illustrates: -

The Nags Head was almost certainly an earlier, or colloquial, name for the Ferry Inn, which had probably been in existence as long as there had been a ferry at the haven, and was shown on the 1824 Ordnance Survey plan. During the 1840s the same family were listed at the Nags Head and Ferry Inn in the space of seven years and ‘Ferry Inn’ was probably a more familiar local name for the Nags Head, or vice-versa. The inn had good custom as this newspaper article from the Hull Advertiser of 24 May 1844 illustrates: -

"BARROW LAUNCH - The launch of a sea-going vessel from Barrow-upon-Humber took place in the Old Haven on Monday evening in the presence of Mr Widdup the builder and a party of friends, who afterwards celebrated the occasion with festivities at his house, and that of Mrs Bell, the Ferry Inn. The vessel is a sloop, of 30 tons new measure, and is called the Ebeneezer”.

The rapid growth of New Holland and the removal of the Hull ferry service, from Barton to New Holland, effectively ended the life of the Nag’s Head. Its demise coincides with the extension of the railway line from New Holland to Barton from late 1848 into 1849, and Barrow Haven was provided with a station/platform. It is unlikely, although as yet unknown, whether the inn carried on in any commercial form after its last listing in the trade directory of 1849, which is strange, as you would imagine a new rail link would have brought more custom. The Haven Inn (see above) being slightly more inland, no doubt took the balance of the local trade following the closure of the Nag’s Head.

The old Nag’s Head / Ferry Inn was located near the site of the old ferry, which is now within the premises of Barrow Haven Shipping Services, whose address is Old Ferry Wharf. There is a surviving building (still occupied) that appears to be of the early 19th Century within their yard, and within close proximity to the ferry site, which is still occupied in 2020. The former inn was just to the north of this property. It survived until the 1970s, when William Foster & Sons (the owners of the land) demolished the building to make way for the storage yards at the Old Ferry wharf. The wharf is an extremely busy one for its size and the population of Barrow Haven is increasing once more although pubs in the area still struggle to maintain a profit in these trying times.

Some references to the Nags Head: - 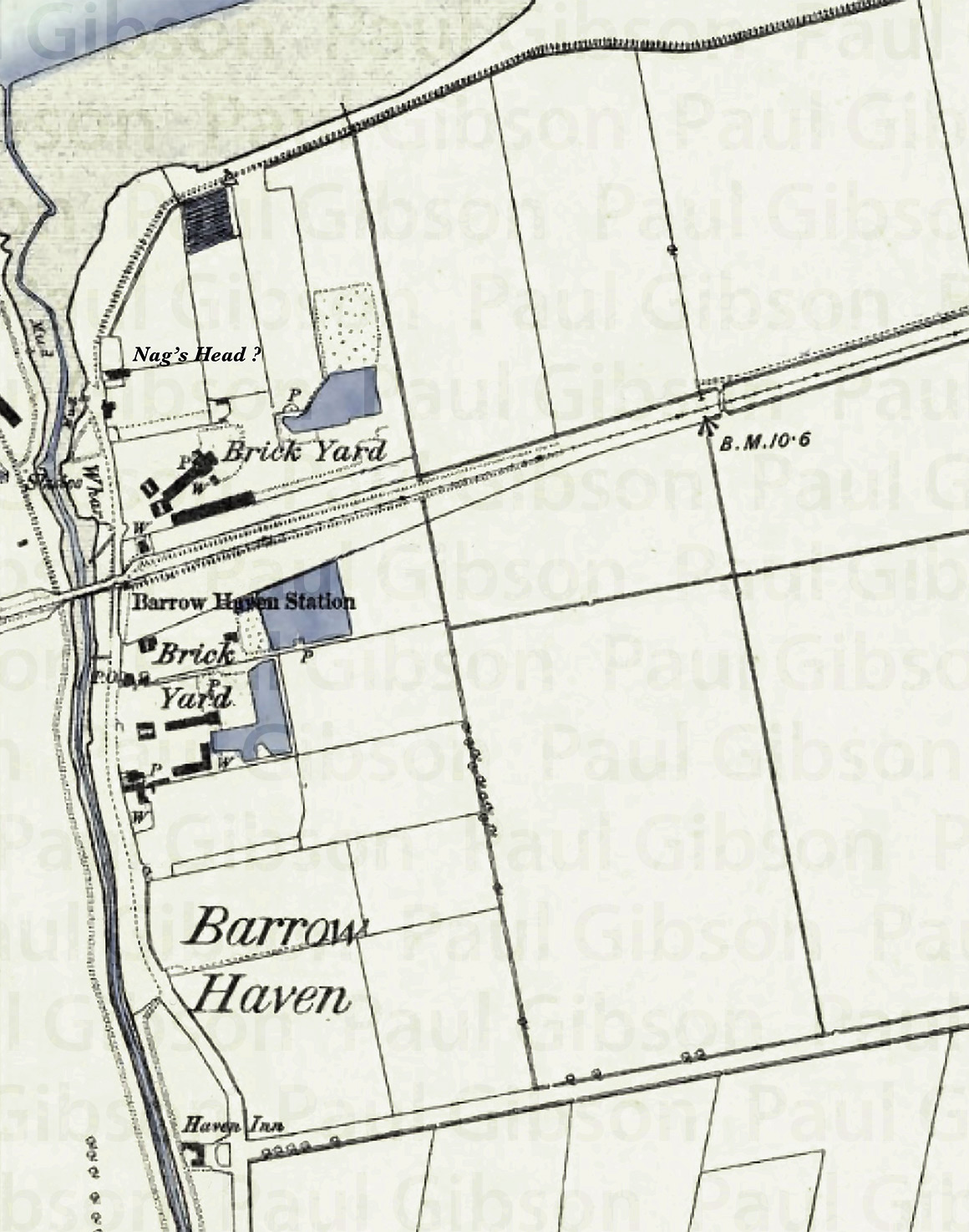 A section of the 1890 Ordnance Survey of Barrow Haven.