As yet I have no image for this pub, and no definitive location. It is possible that this and the unknown beer-house discussed elsewhere (see Barrow unknown beerhouse), were one and the same but this is very unlikely.

The first known reference to the Wheatsheaf Inn Barrow is in the Stamford Mercury in September 1859 when ‘beer-house keeper’ George Parker Sergeant was charged with ‘keeping his house open for the sale of beer etc., during divine service’. Later in the Stamford Mercury in October 1861 it was noted that George Parker Sergeant of the Wheatsheaf Inn, Barrow was fined 10s and 9s costs for serving three short pint measures, and again in 1862.

The 1861 census records the Sergeant family as farmers in a property near the junction of Beck Lane and Brigg Road/Smithy Lane. The old house that exists at the corner of Beck Lane and ‘Brigg Road’ looks very like a pub ... ask the owners ... as the later description mentions it as a road-side house.

Also in 1862 he had his licence suspended until the next Petty Sessions on the grounds of twice being convicted of drunkenness and breach of his licence (Hull Packet September 1862). In December 1863 the Lincolnshire Chronicle reported that George Parker Sergeant of the Wheatsheaf Inn, Barrow was charged with permitting drunken and immoral conduct in his house, and with harbouring notorious prostitutes. He was fined £1 plus costs. Clearly the Wheatsheaf was a lively pub.

In November 1867 the Stamford Mercury ran an auction notice for land in Barrow and the auction was to be held at the Wheatsheaf Inn, Barrow. The notice recorded that further details were available from George Parker Sergeant the owner. Parker owned some of the land for sale and his portion was at the south of a plot in Beck Lane Field; it included a ‘newly erected messuage, with Barn, Stables and outbuildings – nearly new ... the House is a good road-side House’. Could that have been the Wheatsheaf?

N.B. By 1871 George Parker Sergeant and his large family had moved to Hull, where he was noted as the landlord of the Blue Bell in Market Place.

In November 1867 a sale was held at the inn (see full notice below). A large estate that included the “nearly new” Wheatsheaf pub building, that was described as a “good accustomed Road Side House”. The location details of the estate would give a good idea of the location of the lost pub, but it will need a good knowledge of the old landowners of Barrow, and the older names used for the streets and lanes. 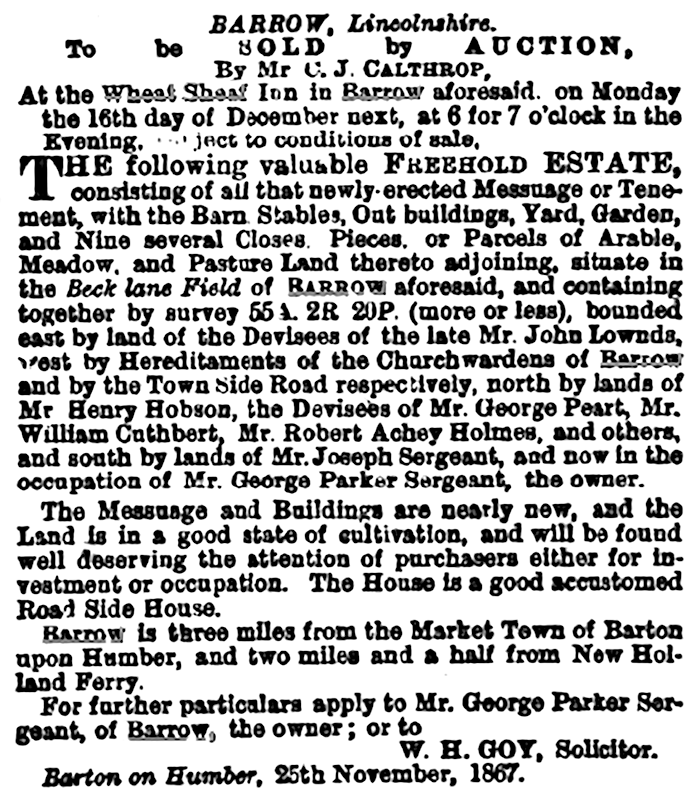 It was also listed by name in an 1868 trade directory when George Parker Sergeant was the licensed victualler.

A much later photograph of a confectioner’s at the corner of Silver Street and Thornton Street from c.1920 shows that one George Sergeant was the owner. Could this be the location, or was this just a family member?

N.B. Within Thorngarth [?] Lane is the Barrow Squash Club, which is a very old building that has the potential to have been a pub and/or a brewery/maltings.

Also … a substantial house in High Street (apparently Victorian, with evidence of it being an old building raised and re-fronted on the North elevation) has the name “Vaults House” in leaded glass over the main door. It also has signs of a large shop or pub front being removed at some point; situated on the east side of the street between the Methodist and Wesleyan Chapels.

This mystery will no doubt be cleared up when these pages are published.

The known references to the Wheatsheaf: -